skip to main | skip to sidebar

Luke Winslow-King is descended from William Brewster, one of the Pilgrim Fathers, who used to live at Scrooby Manor. Hence Luke's affection for Scrooby and how he came to play a set with his increasingly successful band in the Village Hall.

Let me say from the outset that I am a great fan of his. For me, he is one of the few who is keeping the spirit of the blues alive. You may think that strange, since his style is a mixture of different influences. However the blues is strongly at the centre of the mix and is all the stronger for being showcased in the new songs that Luke writes.

Thus I see him as very similar to CW Stoneking, who also writes great new songs, strongly influenced by the blues. I reviewed CW's show at Brudenell in a previous post.

Another of the few is Jerron Paxton, who performs more traditional material, but in his own interpretations. It is no coincidence that Luke & Jerron are friends - Luke told me after the gig that Jerron has stayed with him at his home in New Orleans.

Suffice to say that they were superb! All gigs should be in a small hall like this. Luke has worked at his craft and not only sings & plays guitar well, but is a good showman too; encouraging the audience into participating with hand-clapping, singing, dancing. Yes, I got up and danced before the end. The joy of two excellent guitarists together, often both playing slide! Roberto Luti is a star in his own right, he has a lovely touch and can burn very bright, but never overdoes his solos, they fit into the song. The drumming from Benji Bohannon and bass from Brennan Andes provides a rock solid platform for the two guitars and vocals.

The best blues band in the world at present IMO. At Scrooby village hall!

What was wrong CW?

CW and band played to an appreciative audience, not quite so packed as last time I saw CW play here. Some old favourites went down well and the brilliant, sparkly new stuff did too. But I wasn't the only one to be slightly disappointed. Something was wrong or missing. What was it exactly? Nothing was out of tune, except when CW deliberately made it so. Was it the baritone sax clashing with the upright bass? Was it the backing vocals not loud enough, or lacking pizzaz? The slower songs went better I thought & that gives me a clue. The faster songs didn't really rock. Maybe all the rhythms were too square, lacking syncopation?

I am one of two people who went to this gig and also to CW doing a similar set in November 2014 in Newcastle, NSW, Australia. That band really did rock, the backing vocals very sharp. Maybe the long world tour to promote the excellent Gon' Boogaloo album is just getting CW tuckered out?

Support from CD something and the somethings (sorry guys!) was plucked from old time country, blues, folk, jug band and bluegrass repertoires, which fitted well with CW's original works which are influenced by such musics. Lineup of washboard, guitars, vocals, violin, double bass did a good job.

I still enjoyed the gig, as did the audience. But it could have been better.

Jez Platt - guitar & vocals
Rod Mason - Keyboard, Sax & flute
Chris Sykes - drums
Chris Hargreaves - bass
Ed Collins - trumpet, percussion
First set just seemed to be going thru the motions but the second really warmed up with 'Let me see you shake it on the dance floor baby', 'I shot the sheriff', 'Isn't she lovely', etc; the band got into the groove and the audience called out for more.
Posted by Unknown at 16:01 No comments:

Excited to see CW Stoneking is playing some dates in the UK ... apparently I've missed a couple already! See cwstoneking.com but here are the UK dates:


And apparently in Wakefield sometime at the beginning of August, not listed on his website, but Rich has got me a ticket! Yeah!
Posted by Unknown at 06:56 No comments:

Jazz Dawgs and Friends at The Sportsman

On Saturday we went to Adrian Ingram's 60th birthday bash at The Sportsman in Huddersfield. He plays jazz guitar and used to be a lecturer at Leeds College of Music until, as he puts it, they started talking about 'learning units' instead of students. The 'prof' you could call him.

Terry Kenyon used to play with him for many years, even touring the USA as a duo with Adrian, playing jazz and blues. He played with some of the musicians on Saturday for a few numbers - 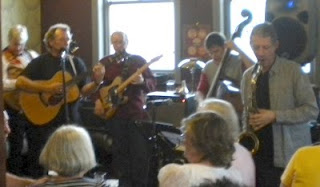 Terry is second from left and Adrian 3rd from left.

We missed the Jazz Dawgs first set - I'm so disorganised that this is a common occurrence, unfortunately. The second set was more of a mixture with guests 'sitting in' on various instruments. I haven't got all the names, I'm afraid. As well as Terry on guitar and vocals, the sax and trumpet players were very good, as was Robin on chromatic harp. A guitarist and bass player, introduced as the Jazz Pups, as they were a bit younger than the rest, also played some fine stuff.

See more about the Jazz Dawgs on their website http://www.jazzdawgs.co.uk

The Sportsman is at http://www.undertheviaduct.com

A good time was had by all!
Posted by Unknown at 05:51 No comments:

losing sight of the road in the mist
we climb and surely it is getting warmer, brighter?
near the summit we are in bright sunshine,
turn and see the tops of clouds spread below our feet

filling the valley below, bright sunshine,
billowing clouds stretched sky
and there standing proud - the top of the mast

alone in that rolling sea of white
that tower of babble on Emley Moor
and we on Black Hill stood elated too.

I took a few pictures before we walked back into the mist
but when I view them later on screen
the tower isn't there and the rolling sea
has gone - just a white haze
stretching to the empty blue.
Posted by Unknown at 04:50 No comments:

Now I love the blues. Ever since hearing Taj Mahal and Fleetwood Mac singles in the sixties, progressing on to Canned Heat. Recently, inspired by Richard Johnston, I've explored the pre-war blues and wonder why I didn't before.
But sometimes I get bored by all the blues bands around at present. Most have a good guitarist, who has learnt to play licks like the famous guitarists from Clapton on. There is a bassist who is steady and a competent drummer. Sometimes there is another guitar, maybe even a harp player to create some different sounds. They've obviously listened to all the same music - Bluesbreakers, Peter Green's Fleetwood Mac, Hendrix, Ten Years After ... then maybe Stevie Ray Vaughn ... but nothing much else. The result is a regurgitation of forty year old standards with slight variations in the guitar licks combined with attempts to exactly reproduce some of the more famous solos. Well rehearsed, but often lacking passion. It is often a recipe for a disappointing musical experience IMHO.

I went to see some of the free events at Marsden Jazz Festival. We saw 2 bands on Friday night & 2 on Saturday night. I know the blues helped create jazz, but it does seem to be strange. I guess blues bands will play for a lot less than a jazz band. Maybe I should pay to get into the main events! However, in general, I like blues better than jazz.

The 3 blues bands we saw were all very good, but the above criticism applied to them all. That's not quite fair, cos there we did get some soul, passion and feeling in the music we heard. Which is what I, for one, look for in music more than anything else.

Joshua Blue in particular displayed great feeling, tinged with more than a little tongue in cheek theatricality. Cliff Campbell (aka Joshua Blue) is a great showman and surely that isn't a bad thing? Although he is more of a frontman and singer than a guitarist, or perhaps because of that, for me his guitar solos knocked spots off anything else we've heard this weekend. He really knows how to phrase his guitar licks so it sounds as if he is saying something meaningful. He makes his guitar talk and what he is saying is pure emotion. His lead guitarist is technically much better and played some lovely stuff, but didn't get near the passion that Cliff wrung out of the music. Local legend Mark Layton-Bennett contributed great percussion as usual and looked to be enjoying himself. The bass and lead player are fairly new to the band & aren't listed on their web site - which could do with some work! They both turned in great performances as well. They had the packed audience baying for more and it wasn't till well after midnight that we got out.

Previously I'd caught a bit of Backwater Blues. Again, not quite fair to lump them into the general criticism of the modern genre as the lead guitarist & singer played some quite original solos, deeply exploring bent notes and overtones. His singing was powerful and up to the job. I would go and see them again, but found myself thinking "how many times have I heard this" before very long.

As I walked into the Carriage House to hear Tat, I was disappointed to hear, for the third time in less than 24 hours, the strains of "Black Magic Woman". Great song, but so overplayed. Again the band was very competent, but not very original. The best thing about them was that they played a couple of notches under the pain threshold in volume terms, which was very refreshing. I was getting tired, maybe I would have found more in them if I had more energy.

Caught a bit of the Stevie Williams trio in the Riverhead - a soul band on bar stools! I like that too. Stevie on bass and vocals, and a couple of guys on electro-acoustic guitar and drums - Jon Kenzie & Eryl Roberts are listed on Stevie's MySpace page. The guitarist seemed to take the lead vocal slot. They sounded great, particularly on Stevie Wonder and James Brown covers. Ended up out on the street listening to them as best we could, since it was so crowded inside. Another good night in Marsden!
Posted by Unknown at 00:03 No comments: